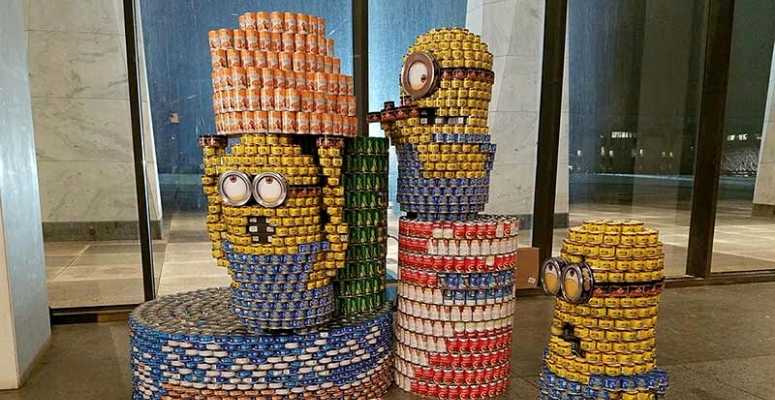 As part of our commitment to serving the members of our communtiy, C.T. Male Associates has participated in the NY Capital Region CANstruction competition since 2012. CANstruction is a hunger relief organization that provides millions of pounds of food every year to local food banks. In our area all of the food goes to the Food Pantries of the Capital District.

(View our Gallery of CANstruction projects since 2012)

Every year the NY Capital Region CANstruction competition has a different theme provided by the organization. Teams work diligently to collect cans of food to create can “sculptures” based upon that theme. Once created, they are judged, and the structures are displayed in the NYS Museum in Albany for two weeks before being disassembled, and the food delivered to local charities.

The in-house team at C.T. Male Associates has a robust history of placing in these competitions! A combination of exceptional organizational skills, engineering know-how, creativity, energy and the spirit of giving back brings a high level of commitment to every entry we submit.

Each organization competes for awards that include:

C.T. Male Associates has been part of this worthwhile project since 2012. An overview of the competitions that we have participated in:

Our first ever CANstruction was “Candissssss” the Burmese Python as part of the “Zoo Can Do It” themed competition. Candissssss included 3,084 cans and had the participation of 18 employees and nine corporate sponsors/partners, which combined raised $3,920.20 for the competition!

The 2015 CANstruction theme was a special one. C.T. Male Associates took the opportunity to honor some real-life heroes. Three WWII veterans were present as they spent over 7 hours constructing the display made from 5,200 canned goods. This display earned the “Structural Ingenuity” award, given to a structure displaying exemplary engineering design ingenuity.

C.T. Male Associates participated as “Hunger Heroes“, providing food and monetary donations. They collected 376 pounds of food to donate to the Food Pantries For The Capital District. They were the third-place team in total amount of food donated

The Minions were put into action to help fight hunger in C.T. Male Associates’ 2017 entry!

This “GO TEAM!” structure was constructed using over 4,900 canned goods, which will all be donated to the Food Pantries for the Capital District once the 2-week event concludes. The C.T. Male Associates entry included 1,656 cans of green chiles, 1,632 cans of tuna, 432 cans of tomato soup, 336 can of sweet peas, 240 cans of mandarin oranges, 216 cans of cream of chicken soup, 120 cans of corn, 96 cans of grill mates rub, 96 cans of chicken, 48 cans of stewed tomatoes, 17 cans of blue soup, 24 cans of sauerkraut, 12 boxes of macaroni & cheese and 5 cookie tins.

C.T. Male Associates’ ‘We CAN Show You The World’ CANstructure was of Aladin. This structure included 5,294 items including 2,256 cans and 84 packets of tuna, 96 boxes of tea, 276 bags of pasta, 312 cans of tomatoes and 500 bags of chips. This structure was entered into the CANstruction Internation Competition and came in 1st place for Best Use of Labels!

2020 marked the 10th anniversary of CANstruction in the capital district which is why it was only fitting that the C.T. Male Associates team decided to “bake” a birthday cake. This structure included 3,881 total cans including 1,248 cans of kidney beans, 500 cans of beets, 400 bags of rea, 168 cans of tomatoes and over 1,000 cans of black beans. This structure won the award for Structural Ingenuity and also Team Spirit!

This year, due to the Covid-19 pandemic, CANstruction fundraising was virtual. We continued to support the Food Pantries of the Capital District by collecting donations online.

For more than a century, C.T. Male Associates has been part of the NY Capital Region. We remain committed to being a supportive member of our communities, participating in local charity initiatives, functions and events.